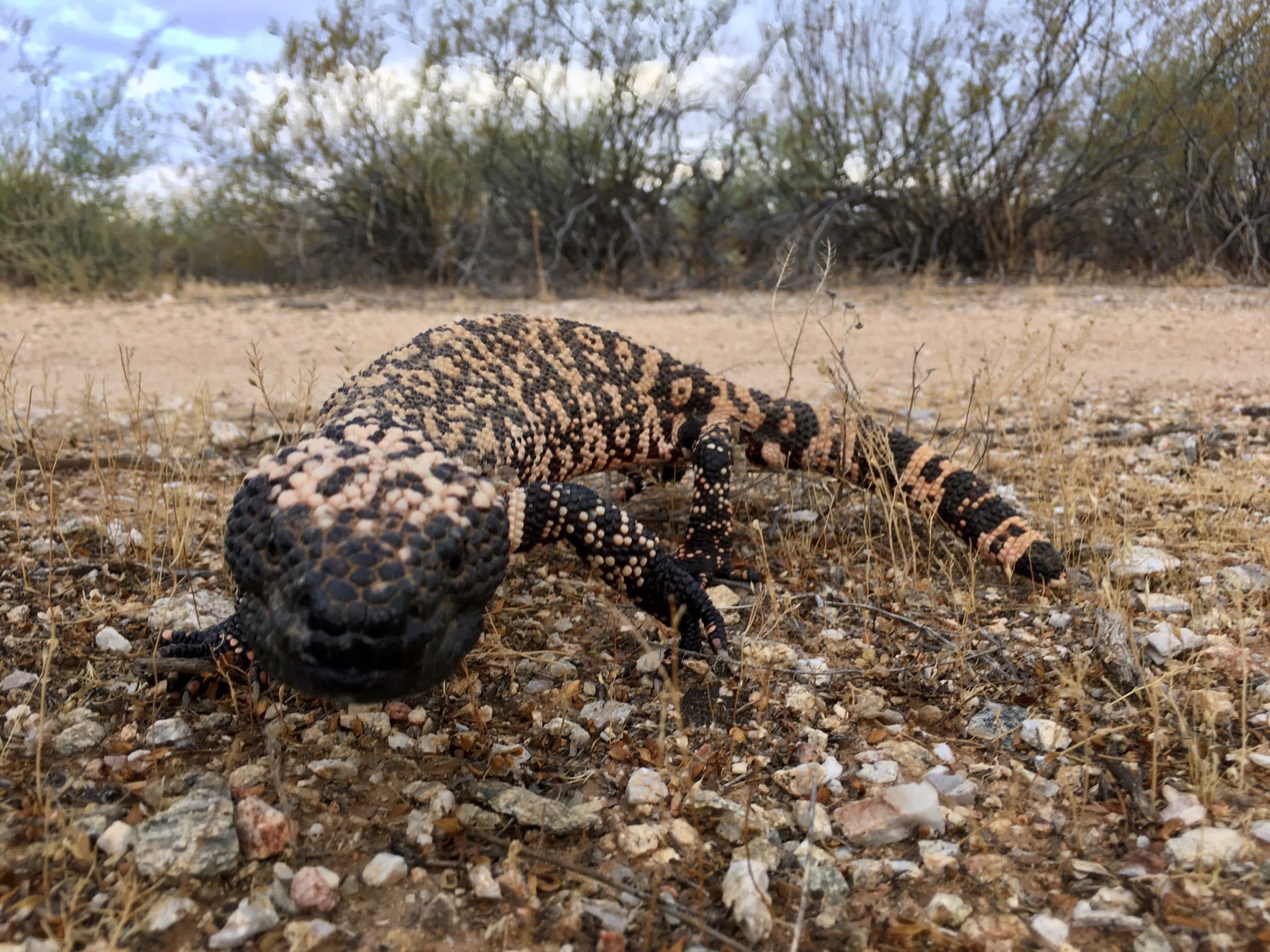 Additional Info • A componenet of Gila monster venom (Exendin-4) has been approved by the FDA to be used in a drug that helps in the treatment of type-2 diabetes.

The Tohono O’Odham and the Pima believed that Gila Monsters possessed a spiritual power capable of causing sickness.  The Apache believed that its very breath could bring death.  And the Seri and Yaqui believed in the healing powers of the lizards hide.

Although not endangered at this time, they are listed as a species that can become endangered.  They were the first venomous animal in North America to get legal protection.  This means that it is illegal to collect, kill, or sell them in Arizona. 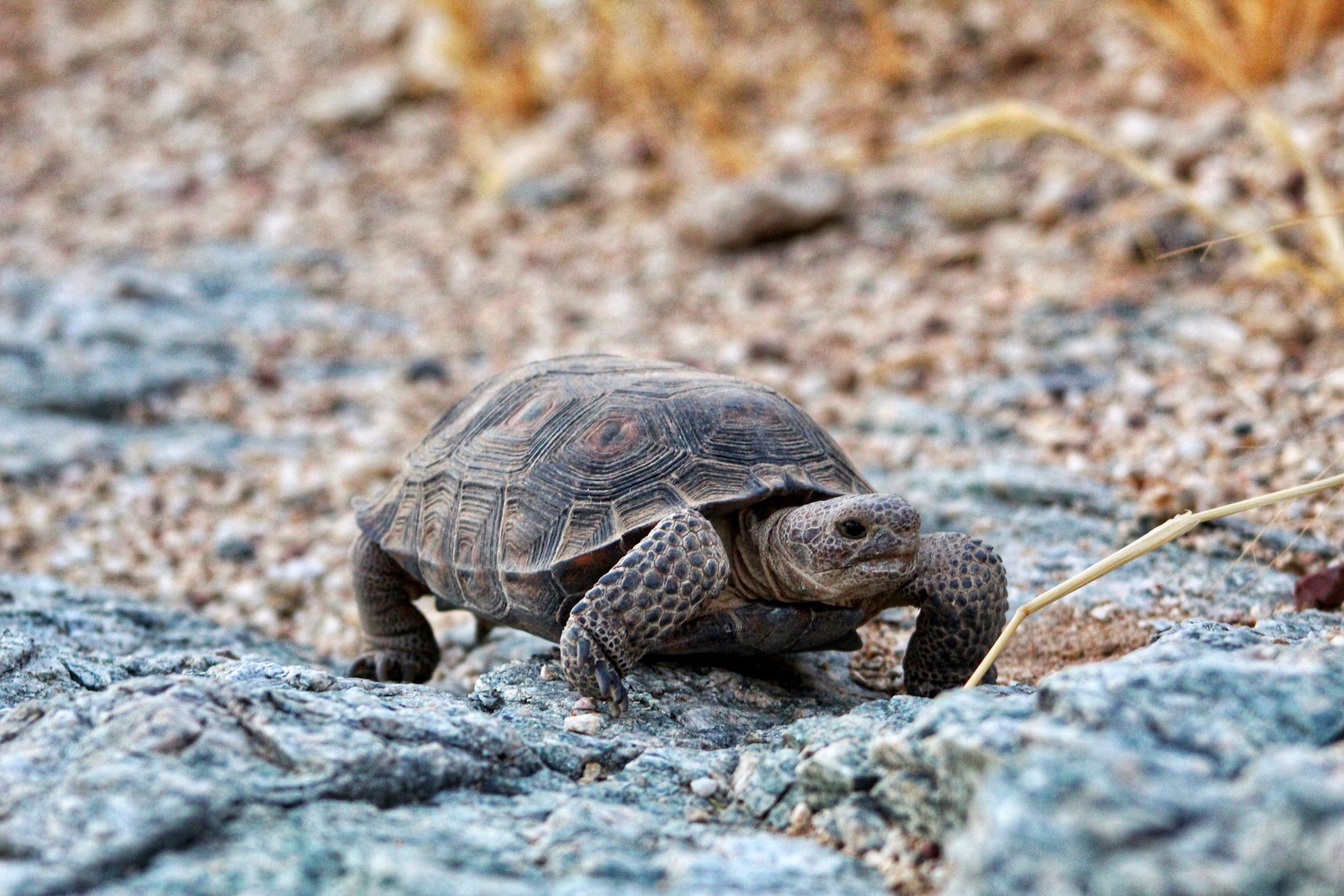 Habitat • Spend 95% of their lives underground.  Sandy flats, rocky foothills, alluvial fans, washes, and canyons where suitiable soils for den construction can be found.  Living up to about 3500 feet elevation.

Additional Info • They spend 95% of their lives underground.

They provide a variety of sounds including hisses, grunts, pops, whoops, huhs, echs, bips, etc to the unfamiliar.  A series of bobs for species and gender recognition, courtship, and threat.  Head bobbing precedes combative behaviour between males, although females may also be aggressive.

Habitat • Most commonsly abundant in moderate tettain such as foothills, bajadas, and flatlands below about 6,000 feet elevation.

Additional Info • When hibernating, they often retreat to communal dens sharing the lair with rattlesnakes, whipsnakes, and racers.

The Gopher Snake can spread and flatten their head when threatened, thereby resembling a rattlesnake. 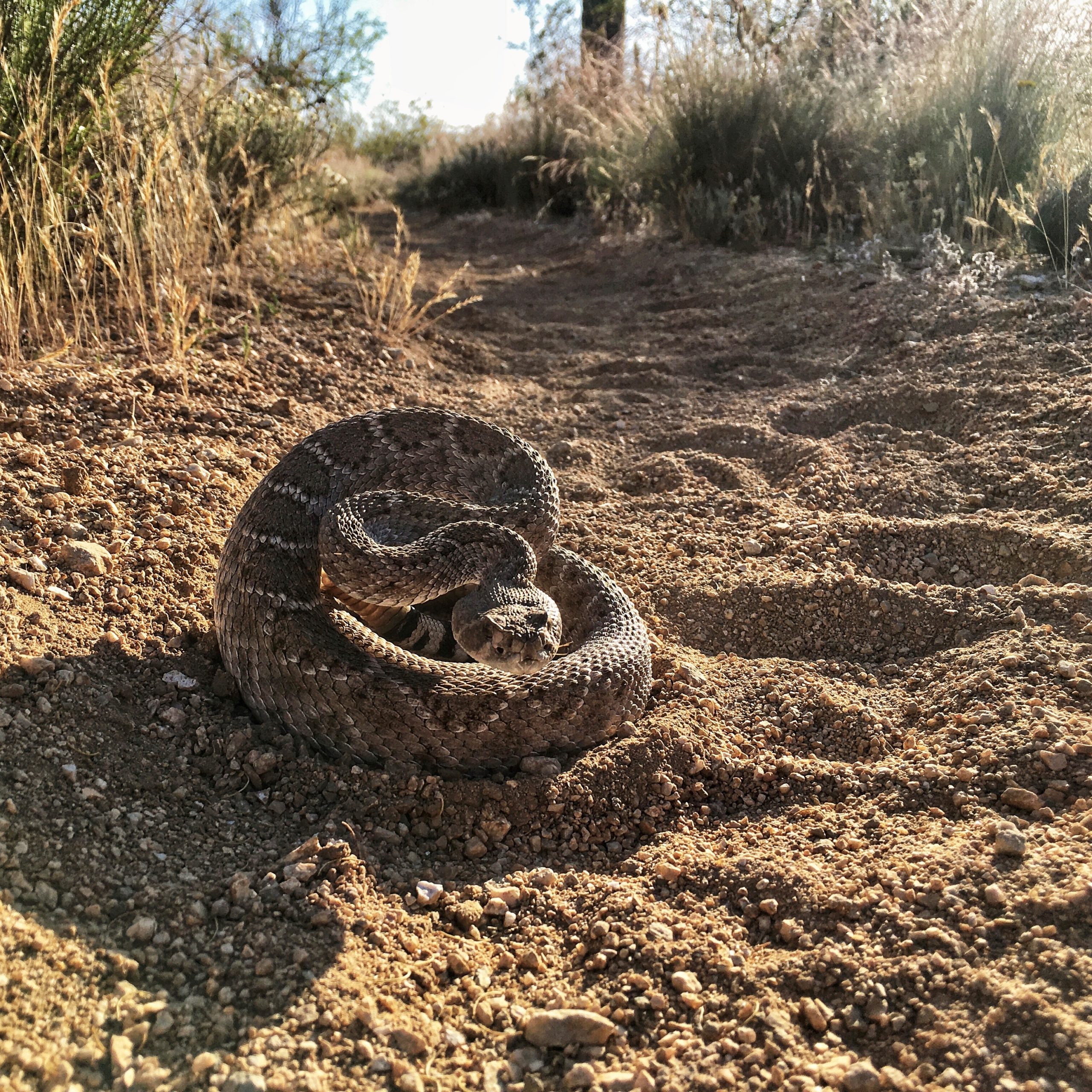 Habitat • Coiled in the shade of low-growing shrubs, piles of natural or artificial debris, or rocks.  They also use the underground burrows of other animals.

Additional Info • Their rattler can move back and forth 60 plus times a second.

The rattle is made up of a protein called keratin.  Same protein that your hair and fingernails are made of.  A new segment added whenever they shed.

They are pit vipers.  Meaning that they have a heat sensing pit located behind each nostil that can detect differences in temps.  Even a fraction of a degree apart.  Which aids them in determining prey.

Habitat • Usually on rocky slopes  or in washes within rocky mountains and foothills.  Rarely found more than a mile from foothills, mountains, or rocky habitat.

Additional Info • They are pit vipers.  Meaning that they have a heat sensing pit located behind each nostil that can detect differences in temps.  Even a fraction of a degree apart.  Which aids them in determining prey.

They are polygynandrous, and either mail, female, or both have more than one mate within a single breeding season.

Known to have an irascible temperament, and are easily excitable and can be quite aggressive.

Despite being ground-dwelling, their activity is not restricted to the ground.  They swim readily and have been found in bushes and above ground. 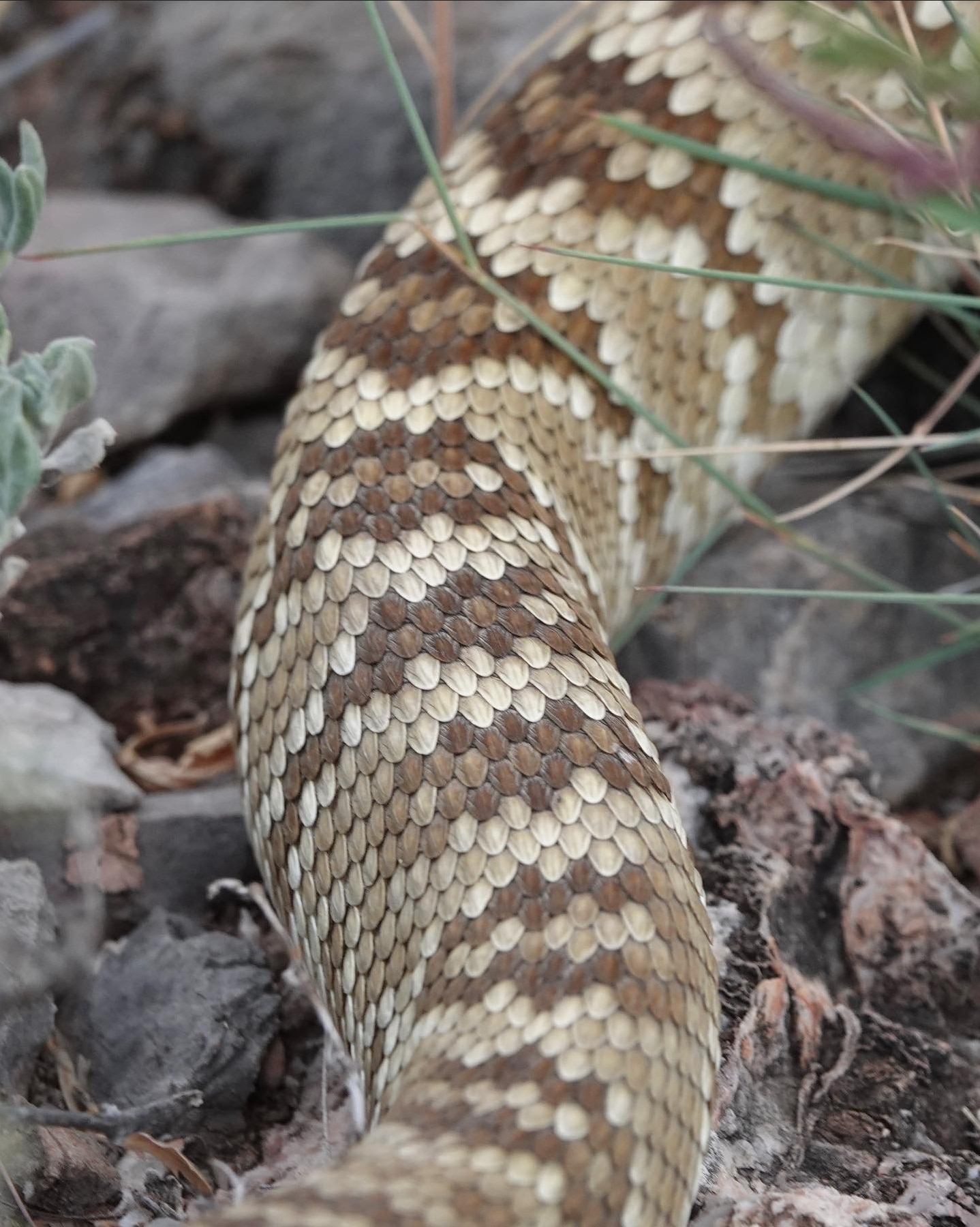 Additional Info • They are pit vipers.  Meaning that they have a heat sensing pit located behind each nostil that can detect differences in temps.  Even a fraction of a degree apart.  Which aids them in determining prey.

An able climber and swimmer.

The venom is primarily hemotoxic.  And only about 2/3 as toxic as the Western Diamondback venom, and is generally not fatal to humans.  And is often used to treat bites.

Because venom is less toxic, it needs to inject large quantities into its prey to be effective.  Therefore has larger venom glands than most rattlesnakes.

Diet • Insects such as grasshoppers and crickets.  But they also east other lizards, including other collared lizards.

Habitat • Spend most of their time on and around rocky areas.  These areas provide shelter from the sun and predators.

Additional Info • When the female lizard is carrying eggs she develops bright red splotches of color on her body.  Disappearing after she has laid the eggs.

When the babies emerge from their eggs, the hatchlings are on their own.  Layingin between 1 to 13  eggs. 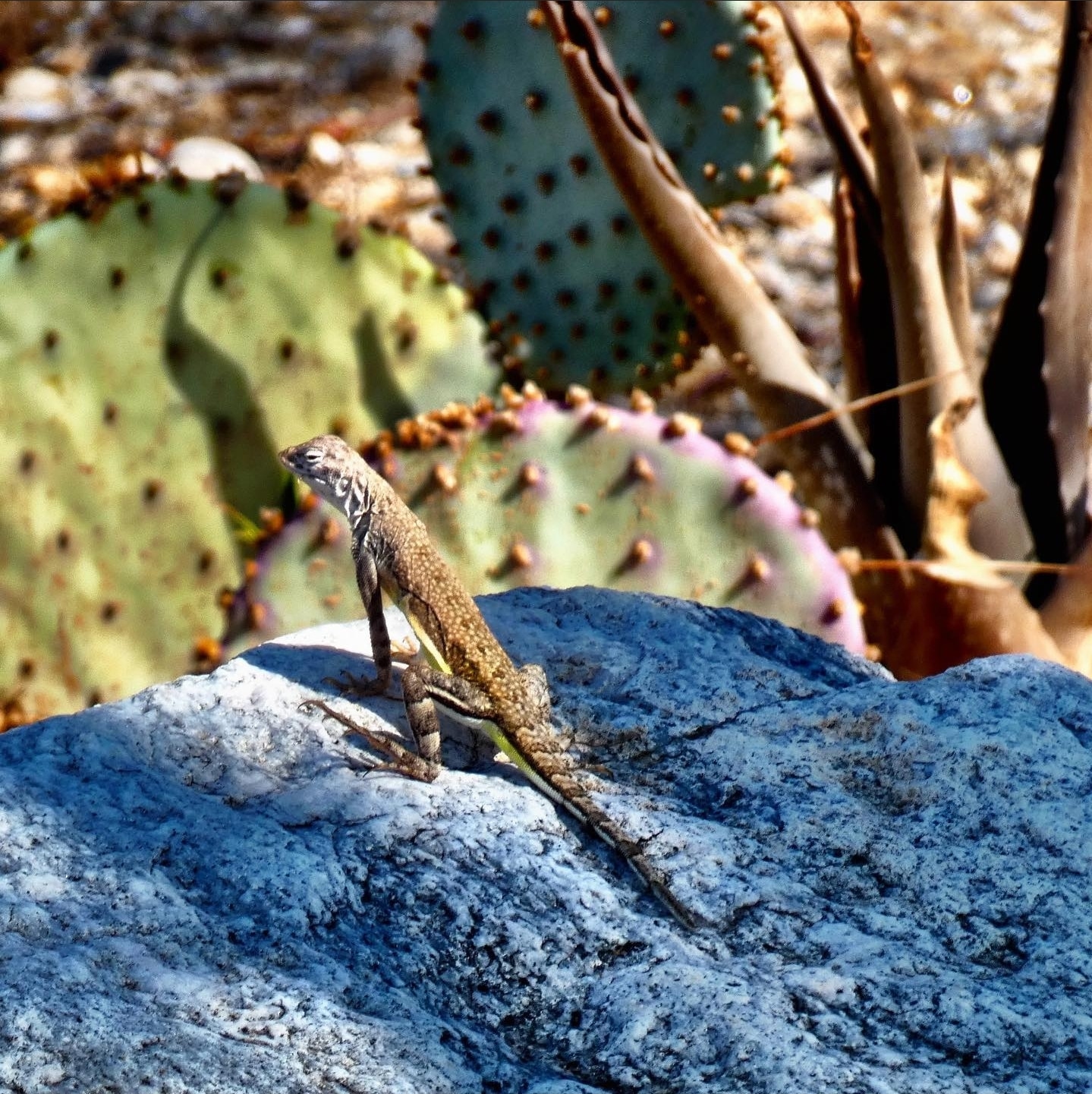 Habitat • Flatlands within the Sonoran desert scrub,.  Usually encountered in areas with sandy soil and plenty of open space in which to run.  Especially sandy washes.

Additional Info • This lizard is diurnal.  Rising early, usually before other species, and remaining active throughout the day in all but the hottest weather.

Diet • Insects including grasshoppers, caterpillars, and moths.  It also feeds on scorpions.

Habitat • It is found in an equally wide variety of terrain types including low valleys, foothills, rocky drainages, canyons, and steep slopes.  It frequents moist areas, often in association with loose ground cover such as fallen leaves, pine needles, and other dead plant material

Additional Info • Capable of casting off and regenerating its tail.  Predators and humans end up with nothing but a wiggling tail.

Found in elevations such as Sabino Canyons all the way to Mount Lemmon. 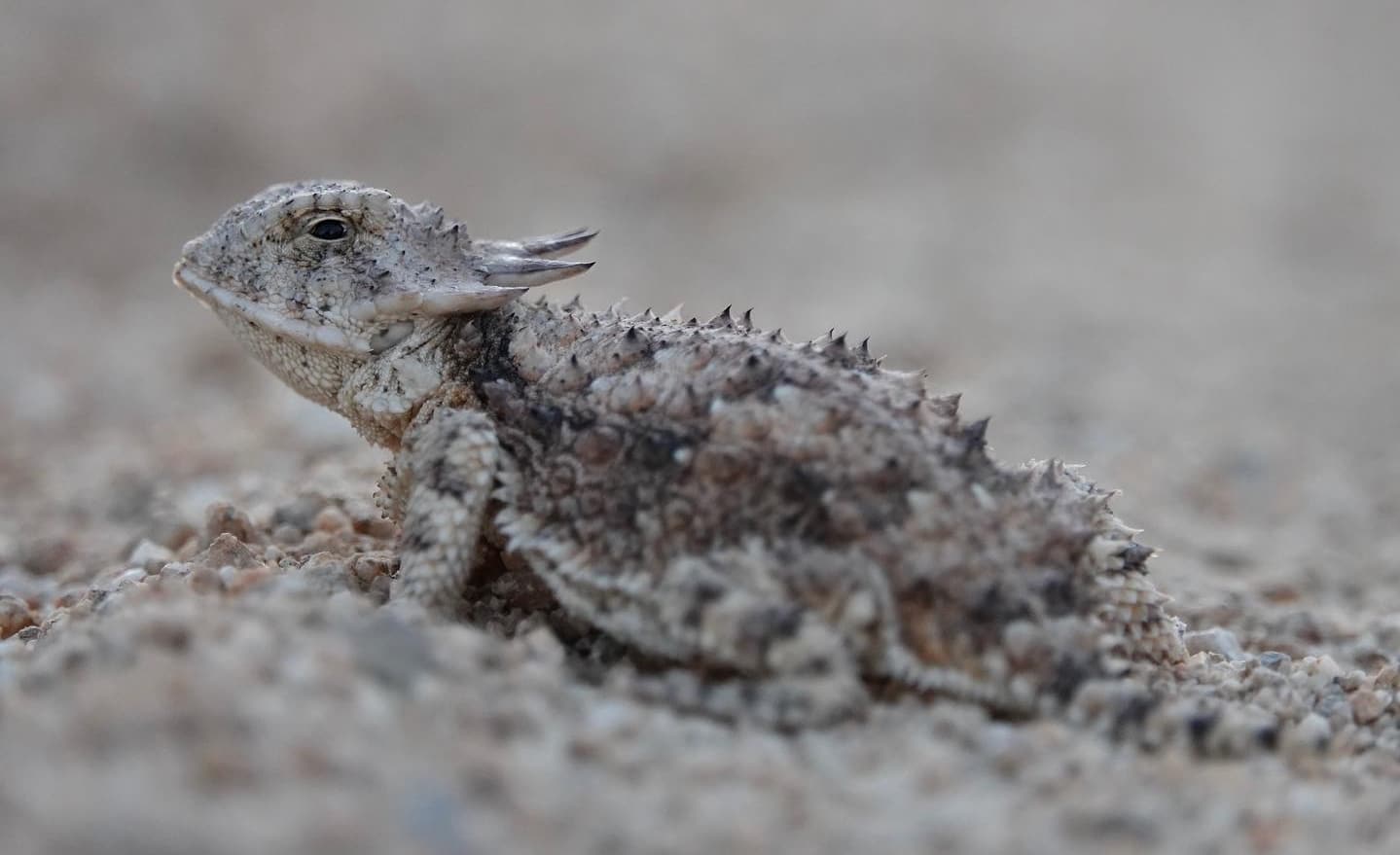 Diet • Primarily feeding on ants.  But italso takes beetles and other insects.

Additional Info • It occasionally squirts blood from its eyes when threated or captured.  The blood might have a foul taste designed to deter predators.  Other defensive behavours include inflating itself by gulping air and poking with the horns. 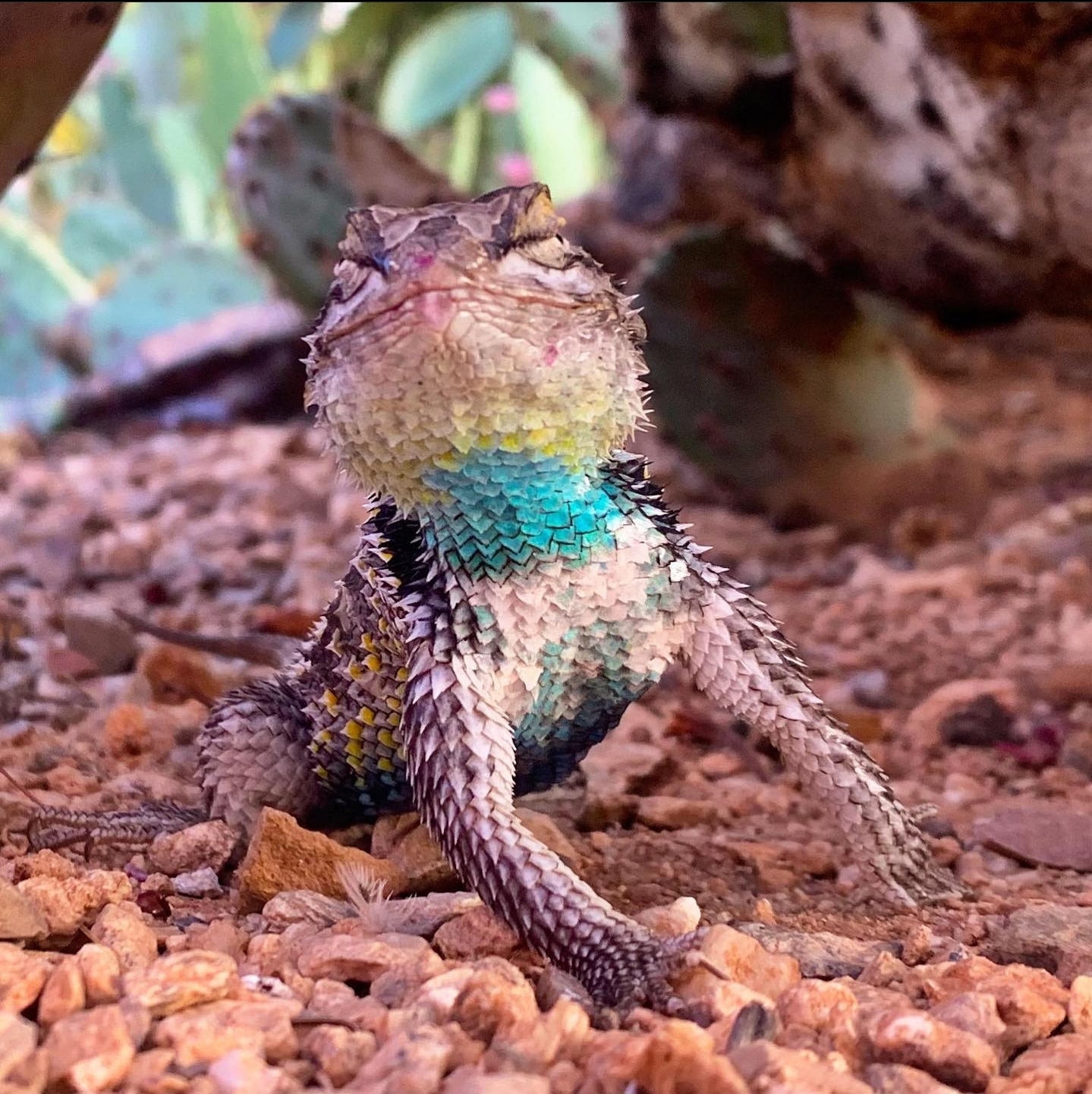 Diet • A variety of insects including ants, beetles, and catepillars.  It also feeds on spiders, centipedes, small lizards, and some plant material.

Habitat • It is usually encountered onlower slopes, bajadas, plains, and low valleys.  Often in the branches of trees or in the vicinity of ground cover such as wood piles, rock piles, and packrat nests.

Additional Info • When it is cooler, colors are much darker than when the temperature is high.  Darker colors increase the amount of heat absorbed from the sun and lighter colors reflect solar radiation.